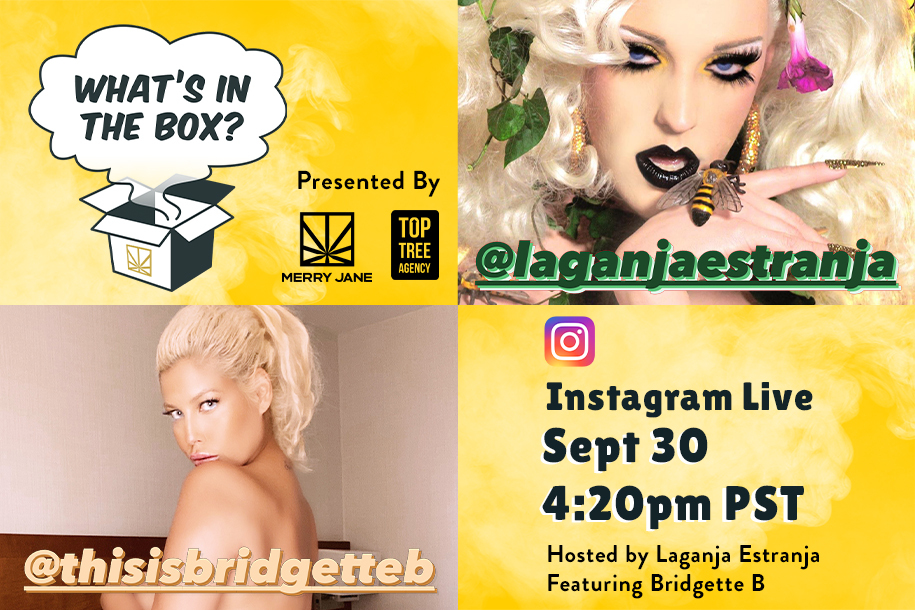 Yesterday at 4:20 pm PT the team at MERRY JANE finessed an iconic virtual smoke sesh between adult film actress Bridgette B and legendary drag queen Laganja Estranja for the second episode of our latest Instagram Live series, “What’s in the Box.”

In collaboration with ZigZag, we sent Laganja, the host of our new show, and Bridgette B mystery boxes full of 420 smoking essentials, weed, and swag, and had them reveal what’s inside. They rolled joints, revealed projects their working on, and threw down on an epic smoke sesh.

Ms. Laganja Estranja showed up looking more glam than Gwen Stefani post No Doubt-era, while Bridgette B rocked a sunkissed natural beach babe look, making the duo ooze effortless sex appeal. Instagram was melting — or maybe we were just high AF. Either way, they were a sight for sore eyes.

But, Laganja did not fuck around. She lit up a joint with a dab rig torch and began asking Bridgette about her career in the adult film space. And Bridgette gave us all the deets.

“I have a podcast called ‘Ready, Sex, Chat’ and it started by not wanting to just be tits on a stick or tits and ass,” Bridgette said. “I started it a few months ago, actually when I started dabbling in cannabis and CBD, and it started making me feel lighter and more myself. It’s allowed me to express myself in whole new way.”

Bridgette explained that she even put a couple of bonus episodes on her OnlyFans, which reveals what goes down in the room while recording her show. “I like to tell people who don’t know about cannabis that the industry is nothing like Boogie Nights!”

The duo received eighths of flower from Long Beach cannabis company Wonder Bread. Laganja got down on their OZ Kush while Bridgette received their Lemon OZ sativa strain. They also got organic hemp granola (because munchies, duh!), ZigZag hemp rolling papers, and rolling trays. And, because our hosts are hot intellectuals who love to read, we gifted them MERRY JANE’s new Sex and CBD book written by Ashley Manta, the one and only CannaSexual, which details how to incorporate the magic of CBD into your sex life.

Aside from getting an inside glimpse of Laganja and Bridgette B’s respective lives, the best part about yesterday’s “What’s in the Box” episode was the fact it featured two wildly talented figures from two counterculture industries: Cannabis and sex work. Laganja, representing our beloved LGBTQIA+ and cannabis communities, and Bridgette, representing the power of sex work, made these two off-beat worlds collide — and it was beautiful. It’s the type of intriguing content the Internet — a bottomless well of mindless productions — needs more of.

We’re not interested in mainstream pairings or making vanilla content. We’re interested in gritty sub-cultures that make life flavorful, fun, and weird, which is exactly what yesterday’s “What’s in the Box” live stream was.

Stay tuned for information on the next episode of “What’s in the Box!” And don’t forget to follow MERRY JANE, Laganja Estranja, and Bridgette B on Instagram.